TimeToGo calculates the duration to drive a car between two places with current traffic taken into account. The last two hours, duration is saved and shown in a history table, thus enabling trends. This can be useful when driving in an urban area suffering from traffic jam from time to time. Instead of sitting in a car queue, go when jam is declining.

Select two places, press START and TimeToGo checks travel time every five minutes during two hour. Which place to start from can be exchanged using the arrow-button. Depending on the apps setting, toll roads may be avoided when the duration is calculated. Up to 15 adresses can be selected after they have been added using the map icon.
Note the same set of adresses are used for both places (first and second adress).

Included is an option to see actual directions by car and corresponding for public transportations.

Information is based on Google API:s and the app requires Android 5.0 or later to be installed. 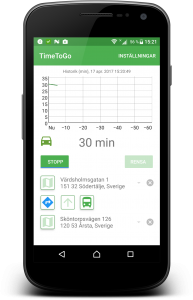